In October 2016 we decided after Christmas we wanted to try for another baby. We were really nervous but I wanted another baby so badly. I didn’t want Corey growing up alone. He was around 1.5 years and my health had gotten better. I saw the doctor had bloods done to check my levels and check I was healthy enough at that point to conceive which I was,  it was all ok so we got the thumbs up.

A few weeks later I got that same feeling. With all my pregnancies my first symptom was tiredness. Its like the pregnancy hormone sucks the life from me and my iron levels instantly drop. I started getting those head aches I new meant pregnant! I kept telling mark I am pregnant I know I am. I must have done like minimum 5 tests all negative. I told him I don’t care what they say I’m telling you I’m pregnant. He kept telling me I couldn’t be the test were negative. I just knew.

One morning I woke up and instantly threw up. Mark came in the bathroom and I told him see I told you I’m pregnant. I remember us actually having a “healthy debate” (argument ha) about it because he was obviously going by the tests but I knew. I wanted him to go buy a test but we had probably spent £30+ in that week on them and he said no we can wait another week. I told him fine. Let him go to work and then I took myself off to the shop with Corey to buy the test ha!

I was probably about 2 week late on my period but they were never regular so I couldn’t really go by that. I came home and I was SO desperate to go and do the test but I wanted to do it with mark because I just knew I was. With Corey I didn’t have a clue I was, not even the slightest but once you’ve had one you just know the signs. So that night I didn’t mention I had even brought it we sat down for dinner and I had literally held my wee for hours and I just couldn’t hold it any longer so in the middle of us eating I went the loo and did it.

Instantly the 2 lines appeared. Although I already knew seeing the conformation on the test my hands started shaking and I just stood there crying. I was so happy but terrified of another loss. Mark had shouted to ask if I was ok and as I walked in the room he stood straight up when he saw me crying. I put the test on the table and said told ya. He stared at it and his hand slowly went to his mouth haha I can picture it now so clearly his face haha! We both bursted out laughing. We were so excited we told family straight away before we had even finished dinner.

To begin with my sickness wasn’t as bad as Coreys pregnancy. I was tired a lot and the SPD pain came back within a few weeks. I was poorly and weak but nothing like the first time. I had been put on strong supplements straight away and b12 injections every week. I also went to see a specialist in blood. I had started getting really fast heart palpitations and so I saw a heart specialist also. I had to wear a heart monitor everyday to track my beats and it would alarm if it was to high. I did have a few hospital trips in the ambulance as my heart rate was reaching towards 200. I also had gestational diabetes and had to injection the insulin but that wasn’t controlling it. The slightest bit of food would rock my body and at 36 weeks it was decided we should deliver. I had been having long hospital stays like 2 weeks at a time because of my heart and insulin.

I had been so worried about my hospital stay as my first has been awful but the staff were a thousand times better and so more caring I even went back in with cards and chocolates to say thank you for there care after every stay because I just felt like they went above and beyond every time.

On the morning that was supposed to be my section we arrived and it came to light I hadn’t received pre section injections to help develop the babies lungs abit faster as I was early. So I ended up having to stay another few days while having them. But on the morning of my c-section the exact same thing happened as it did with corey the heart rate of the baby was dropping a lot and I was rushed down to theatre luckily mark had already arrived . I was terrified. I remembered the pain I had felt when the needle went into my spine. I got on the table and told him you have to tell me when its going in. They spray the freezing spray on and I sat waiting but nothing I literally felt nothing hah! The next thing I know I cant move my legs haha  id spent 9 months terrified of that one needle but it couldn’t have gone any better. Derry was born with a blood sugar level of 1 so needed some extra help and was taken from us to intensive care. I was taken back up to a private room with mark and no baby. I have to be honest and say I was glad they took her for a while. I couldn’t relax not being able to get out the bed to her and I didn’t want anyone to leave the room incase she couldn’t breathe as she was breathing funny and I couldn’t get to her. So for that hour they took care of her I was able to sleep and process the delivery. Within an hour her levels were back up and she was brought to us. She was beautiful and perfect. 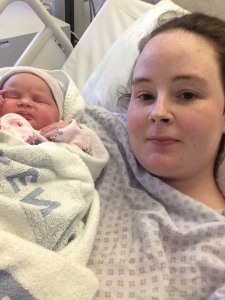 As corey was at home with my mum, mark needed to swap with her so she could get home an hour away. So after I was settled in the bed and derry was all fed and sorted mark left to swap with my mum. As soon as he had gone I knew I wanted to get up out the bed. The last section I had been in bed for hours and I couldn’t do anything for corey and I refused to let that happen with derry. I called my buzzer and asked to get up, they looked at me like id shot them! hah! She said but you’ve just had your section 2 hours ago but I was determined. This is a memory I will never forget or her face and I always look for her whenever ive been to the hospital since. I wish so much I had got her name. But this one nurse said right come on she wants up shes mum she knows best. She got me clean clothes out, my wash bag and helped me to the bathroom. I had expected her to leave me there to wash and sort myself but she got straight on the floor helped me undress all whilst talking about everyday things like I wasn’t standing there naked hah! She washed me head to toe. Then dressed me and helped me back to the bed. She brushed my hair and then asked could she feed derry and change her nappy. I felt like she was my best friend. I will never forget her. she was absolutely amazing and couldn’t have been kinder to me if she had tried.

The pain was nothing like I had with corey I didn’t have any morphine at all. I think because with my first I was still numb and had no feeling there it really helped with my second. I had zero pain at all until about a week later we had to take her back to a&e for jaundice and spending the whole day sitting really pulled my muscles and caused a lot of pain but that was the only pain I had. I was home the next morning after having her and I felt great. I didn’t need any help in caring for her and it was an amazing difference to my first.

Even the first night there the midwives and staff were amazing. Derry wouldn’t sleep she cried the whole night none stop. The midwives came in and told me they were taking her so I could rest and they went and got her a dummy from the baby unti. After an hour I could hear crying, so funny to think I knew her cry even after only knowing her a few hours myself but her cry woke me and I went off to find her. She was with a midwife at a desk drinking her tea who had a baby over knee asleep derry in her arm and 2 other babies in there plastic beds fast asleep. As soon as she saw me coming she said don’t you think about it get yourself back to bed she is fine shes fed ive changed her shes just getting used to being out the womb shes not in pain shes just settling in get yourself back to bed, I laughed and went to carry on walking to her and she said oi missy I mean it even if you walk all this way I’m not giving her up so turn your bum back around and get back to bed haha She was amazing. I woke about an hour later to derry next to me in her plastic cot with a radio on the table playing country music. It was the only thing that would settle her at home to she didn’t like the quiet.

I couldn’t thank for NHS staff enough for my care with my second pregnancy they were amazing.

There was an error retrieving images from Instagram. An attempt will be remade in a few minutes.